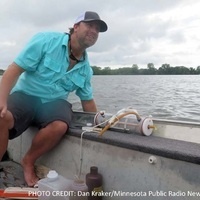 Little Things Show Big Changes in Big Lakes: What Algae Tell Us about a Century of Change in the Great Lakes

In addition to forming the base of most aquatic food webs, algae species exhibit high-fidelity relationships with many environmental stressors, and respond rapidly to changing conditions. In the Great Lakes, over a century of algal community data from both monitoring and paleolimnological studies indicate a variety of interesting trends in the lakes, including the onset of - and recovery from - cultural eutrophication, as well as the influence of dreissenid mussels. While these patterns vary from lake-to-lake, the overwhelming basin-wide signal, particularly in recent decades, has been that of changing climate. Specifically, paleolimnological surveys of the lakes have shown that mean cell size of planktonic diatoms has decreased significantly both within species and across the community (-5.11 µm3/yr.), indicating demographic shifts towards later-generational, smaller individuals, as well as a replacement of larger-celled taxa by smaller ones. Further, we have observed a marked increase in the relative abundance of small-celled taxa within the genus Cyclotella sensu lato, a group characteristic of permanently stratified, tropical and subtropical systems. These paleolimnological findings suggest an increase in the intensity and duration of vertical stratification during the open water period, and accelerated losses of large, heavy diatoms from the phytoplankton community. Indeed recent monitoring data (2000-present) has confirmed increased vertical size structuring in the phytoplankton community during summer stratification, with large-celled diatoms sinking to the deep chlorophyll layer while smaller diatoms are able to maintain position within the epilimnion. Cyanobacteria exhibit the opposite pattern, with buoyant, large-celled individuals occupying the summer epilimnion and largely replacing diatoms in terms of biomass. These changes in the primary producer community are profound and underlie many of the "symptoms" of warming that we observe in the Lakes (i.e. HABs, re-eutrophication, oligotrophication). However, we currently have no understanding of their implications for higher trophic levels or human health.