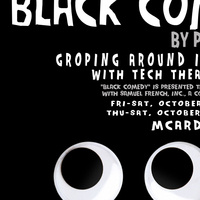 Presented by the Tech Theatre Company, Black Comedy is a one-act farce by Peter Shaffer, first performed in 1965.

The Tech Theatre season is off to a fun, lighthearted start with a laugh-out-loud farce!  In this hilarious fast-paced comedy, lovesick and desperate sculptor, Brindsley Miller has embellished his apartment with furniture and object d’artes “borrowed” from the absent antique collector next-door, hoping to impress his fiancée’s pompous father and wealthy art dealer.  Everything goes wrong when a fuse is blown leaving the apartment in total darkness.  Only we, the audience, are privy to the riotous antics that happen when the lights go out.

The Department of Visual and Performing Arts is pleased to present a comedy by Peter Shaffer, Black Comedy, in the McArdle Theatre for two weeks, Friday – Saturday, October 11-12, and Thursday – Saturday, October 17-19, at 7:30 PM each night. Starring Michigan Tech’s Dalton Knight, first year physics major from Zeeland, MI, as “Brinsley Miller,” at whose “apartment” the action of the play takes place. Black Comedy is a one-act farce by Peter Shaffer, first performed in 1965.

The play is written to be staged under a reversed lighting scheme: the play opens on a darkened stage. A few minutes into the show there is a short circuit, and the stage is illuminated to reveal the characters in a "blackout." On the few occasions when matches, lighters, or torches are lit, the lights grow dimmer.

Tickets are on sale now, $15 for adults, $5 for youth, and no charge for Michigan Tech students with the Experience Tech fee. Tickets are available by phone at (906) 487-2073, online at mtu.edu/rozsa, in person at the Central Ticketing Office in the Student Development Complex, or the night of the show