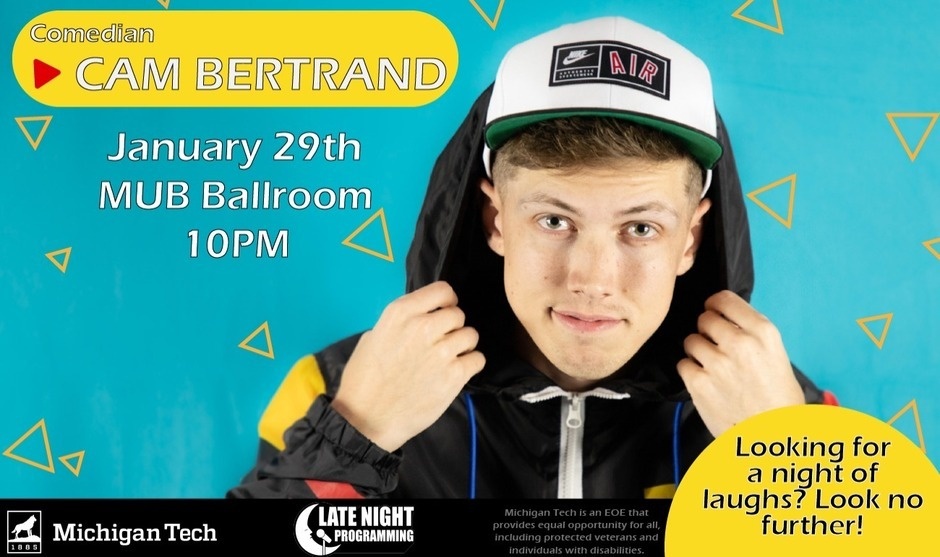 Join Late Night for our first comedian of the Spring semester - Cam Bertrand!! This hilarious event will take place Saturday, January 29 at 10 PM in the MUB Ballroom.

Cam Bertrand is one of the fastest rising comedy stars in the country.  Cam’s comedy can best be described as “sophisticated ignorance”. He prides himself on being able to turn even the dumbest conversations into ones that will have you up late at night asking yourself “What is that .01% of germs that GermX can’t kill after all this time?!..”

He’s opened for some of the biggest names in comedy today including Bert Kreischer, Joe Rogan, Pete Davidson, Michael Che, and Mike Epps. He was a contributing writer on two seasons of MTV’s Wild’N’Out (Seasons 11 and 12), has over 100 million views on TikTok (@camthecomic) and his recent Dry Bar Comedy special has been seen by millions online.  In 2021 Cam became a finalist on season 16 of NBC’s America’s Got Talent!

*This event is free and contains college humor.