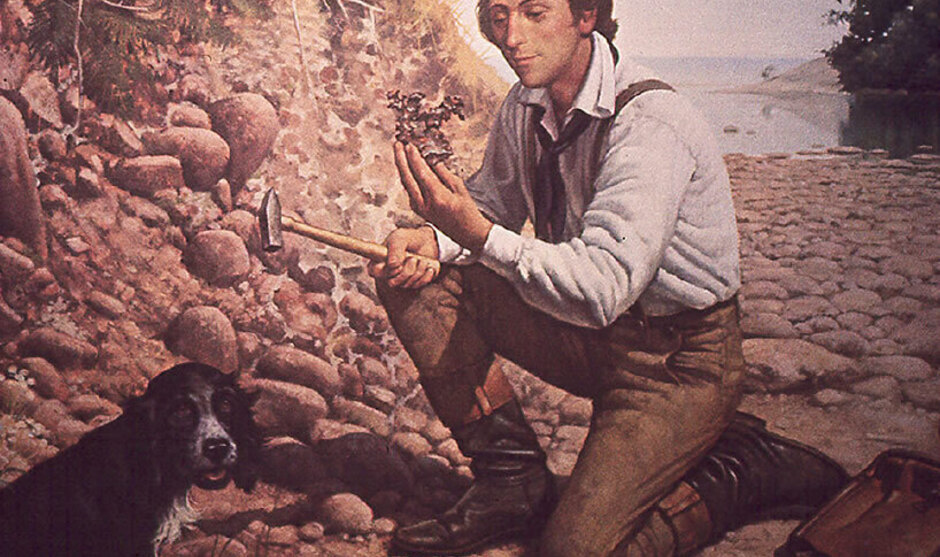 Douglass Houghton was Michigan’s first state geologist. His report of 1841 describing the copper country sparked America’s first mineral rush and brought hundreds of people to the Keweenaw to seek their fortune in copper. Unfortunately on October 13, 1845 Houghton drowned when a sudden squall capsized his small boat near Eagle River.

Join us for the dedication ceremony for this State of Michigan Historical Marker honoring Douglass Houghton. It is dedicated to Houghton’s memory and his impact on Michigan and the nation. The ceremony will take place not far from where Robert Thom (1915-1979) pictured Houghton working at Eagle River. The painting is entitled Douglas Houghton finds copper: 1840.

In 1837, Michigan was recognized as a state and Douglass Houghton became Michigan’s first State Geologist.  One of his tasks was to explore the lands of the new state and report to the legislature on his findings. His report of 1841 spoke of the rich copper and mineral deposits he had located in the Upper Peninsula. His report launched America’s first mineral rush and challenged the view espoused by the Detroit Free Press that the Upper Peninsula was a “land of “perpetual snows”.  It was Houghton’s report that spurred the development of the copper mines in the Keweenaw and the growth that followed for over a century. Unfortunately, Houghton drowned on October 13, 1845 when his small boat capsized near Eagle River. In 1914 the Keweenaw Historical Society dedicated a memorial in his honor in Eagle River composed of stones from various copper and iron mines throughout the Upper Peninsula.

In 2012, the Michigan Basin Geological Society, a group founded in 1936 to explore topics devoted to the geology of the Michigan Basin, contacted the Keweenaw County Historical Society about the possibility of both groups working together to obtain a State of Michigan Historical Marker dedicated to commemorate Douglass Houghton and his achievements.  The groups enlisted the help of Houghton Township and selected a spot near the Houghton Township Community Building, which is also the location of the Keweenaw County Historical Society Eagle River Museum. The application received final approval in 2016 and all three groups set to planning a ceremony for the dedication of the marker.

The dedication of the Douglass Houghton State Historical Marker will be held on Saturday, September 10, 2016, from 10:00 AM to 12:00 PM at the Houghton Township Community Building, 5059 Fourth Street, in Eagle River, Michigan. Following opening remarks from Houghton Township, the Keweenaw County Historical Society, Michigan Chapter of the Association of Professional Geologist  and the Michigan Basin Geological Society, Mr. Barry James of the Michigan Iron Ore Industry Museum will lead the official dedication representing the State of Michigan Historical Marker Program. A highlight of the event will be a presentation by re-enactor Kyle Bagnall who portrays Bella Hubbard who accompanied Douglass Houghton on several of his expeditions.  “Bella Hubbard” will help us to understand what Douglass Houghton experienced on his journey to Lake Superior and the Keweenaw and why it was so important. The event is open to the public and everyone is welcome to attend.

Sponsored by the Michigan Basin Geological Society, the Keweenaw County Historical Society, Michigan Chapter of the Association of Professional Geologist and Houghton Township.

The original monument plaque was restored by the Keweenaw Historical Society.