From Arabia to Appleton: Cyanotoxins and the Risk to Human Health 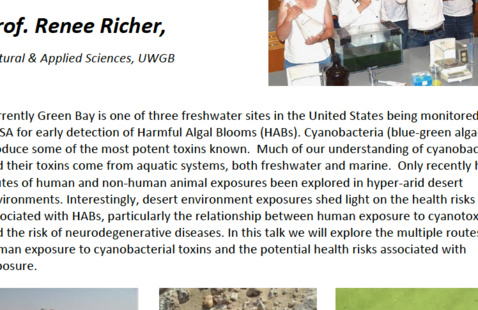 Dr. Richer received her BA in biology from the University of Chicago and her Ph.D. in biology from Harvard University in 2004.  She joined the University of Wisconsin Green Bay, Marinette campus in August 2014.   Her current work focuses on the intersection of biological processes, sustainable development and human health.  For the last decade, she has been working to understand routes of human exposure to cyanobacterial neurotoxins, such as those produced by Harmful Algal Blooms, and their role in ALS, Alzheimers and Parkinson disease.

Currently Green Bay is one of the three freshwater sites in the United States being monitored by NASA for early detection of Harmful Algal Blooms (HABs).  Cyanobacteria (blue-green algae) produce some of the most potent toxins known.  Much of our understanding of cyanobacteria and their toxins come from aquatic systems, both freshwater and marine.  Only recently have routes of human and non-human animal exposures been explored in hyper-arid desert environments.  Interestingly, desert environment exposures shed light on the health risks associated with HABs, particularly the relationship between human exposure to cyanotoxins and the risk of neurodegenerative diseases.  In this talk we will explore the multiple roles of human exposure to cyanobacterial toxins and the potential health risks associated with exposure.

Department of Civil and Environmental Engineering