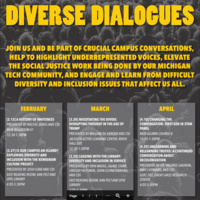 Being a first-generation student on a university campus can be isolating on its own — that’s if one even recognizes that they have different experiences and disadvantages than other college students whose immediate family members have gone to college and earned a degree.

The Center for First Generation Student Success states, “The term 'first-generation' implies the possibility that a student may lack the critical cultural capital necessary for college success because their parents did not attend college.” While many first-generation, college-seeking students prove to be academically advanced, the hidden “curriculum” of university life can change the opportunities and success of a first-gen individual.

It’s estimated that approximately 25% (or more given new literature) of students enrolled in four-year degrees nationwide are identified as first-gen and given the multitude of hidden obstacles, approximately one third of first-gen students drop out of college after year three.

The Center for Diversity and Inclusion (CDI) invites you to join Michigan Tech faculty and staff who identify as former first-gen students for a Diverse Dialogue panel, “Changing the Conversation: First Gen in STEM “ at 12:05 p.m. Wednesday (April 10) in the Memorial Union Alumni Lounge.