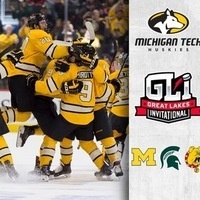 Since its founding by Michigan Tech in 1965, the Great Lakes Invitational Hockey Tournament has brought thousands of Michigan Tech fans together for one of the greatest traditions in college hockey.

Connect with fellow Huskies in the 1701 Pub (Little Caesars Arena, upper concourse - SW corner near the Meijer entrance) an hour prior to each Michigan Tech game.

Hotel rooms for the fans attending the GLI are available at the Marriott Detroit Renaissance Center. Click here to make your reservation.