Heterodoxy in Fast Pyrolysis of Biomass 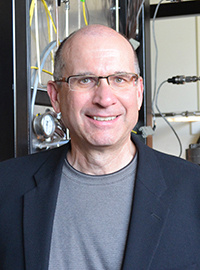 Abstract: The development of fast pyrolysis for thermochemically processing biomass dates to the early 1980’s. As might be expected for a forty-year-old technology, maturity has brought with it a kind of orthodoxy regarding the practice of fast pyrolysis. Among these tenets are: (1) oxygen should be excluded from the pyrolysis process to avoid oxidative degradation of bio-oil; (2) pyrolysis produces as its major product a complex and low-value emulsion of lignin-derived oligomers in an aqueous phase of mostly light oxygenated compounds; and (3) sugars are minor constituents of bio-oil. In fact, adherence to these tenets is an impediment to the commercial development of fast pyrolysis. Over the past fifteen years, research at Iowa State University’s Bioeconomy Institute has challenged these tenets in what might be called heterodoxy in the science and engineering of fast pyrolysis. This presentation reviews the development of autothermal pyrolysis, enhancement of pyrolytic sugar production, and bio-oil fraction to recover and purify sugars, concluding with an outlook for further developing these technologies.

Exclusion of oxygen appears to be eminently reasonable to prevent oxidation of condensable organic vapors to non-condensable gases. An often-overlooked advantage of adding a small amount of oxygen is the possibility that the exothermic energy release from partial oxidation of the products of pyrolysis will provide the enthalpy for pyrolysis. Such an autothermal process eliminates the need for heat transfer, with several important advantages including simpler reactor design, process intensification, and improved scalability.

Bio: Dr. Brown received his PhD in Mechanical Engineering from Michigan State University in 1980. He is a Fellow of the American Society of Mechanical Engineering. He received the Don Klass Award for Excellence in Thermochemical Conversion Science in 2015. He has eighteen patents, one of which received a R&D 100 Award from Research and Development Magazine in 1997.

Dr. Brown is Anson Marston Distinguished Professor in Engineering and Gary and Donna Hoover Chair in Mechanical Engineering at Iowa State University (ISU). He holds the rank of Professor in the Departments of Mechanical Engineering, Chemical and Biological Engineering, and Agricultural and Biosystems Engineering. Dr. Brown is widely recognized as a thought leader in processing of biomass into energy, fuels, and chemicals. He has been recognized by Biofuels Digest as one of the “Top 100 People” in bioenergy for six consecutive years. His activities have been cited hundreds of times in the press including Nature Magazine, Scientific American, New York Times, Discovery Magazine, BBC, Aljazeera International, and the Chronicle of Higher Education. He has dozens of invited talks to audiences ranging from the Iowa Democratic Caucus to the GE Whitney Symposium.