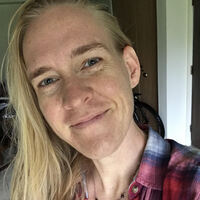 Dr. Jessie Runnoe of University of Michigan will present "Quasars in the age of time-domain astronomy" on Thursday, February 14, 2019 at 4:00pm in Fisher Hall 139.

Abstract: Black hole feeding, visible as quasars, is a critical ingredient in many fields from galaxy evolution to multi-messenger gravitational wave astrophysics. Despite their prodigious luminosities, the important emission regions surrounding the supermassive black hole – the accretion disk and broad line region – cannot be imaged directly because of their small angular sizes. Because quasars are intrinsically variable phenomena, time-domain spectroscopy is a powerful tool for revealing their nature. Single-epoch spectroscopy has been a workhorse for building the modern picture of quasar central engines. Extending this to the time domain promises new insights and exotic discoveries. I will describe two examples from my work on quasars in the time domain: an observational search for supermassive black hole binaries, an expected but unobserved product of galaxy evolution, and changing-look quasars, newly observed rapid transitions between "quasar-like" and "galaxy-like" spectral states. With ongoing and new facilities like the Sloan Digital Sky Survey and Large Synoptic Survey Telescope, the future is bright for our understanding of quasars in the upcoming era of time-domain astronomy.

Bio: A California native, Dr. Jessie Runnoe is currently a postdoctoral research fellow in the Department of Astronomy at the University of Michigan. Her work focuses on the feeding habits of supermassive black holes visible as quasars. She previously held a postdoctoral position at the Pennsylvania State University and completed her Ph.D. and B.A. at the University of Wyoming and Whitman College, respectively. Dr. Runnoe is an avid mountain biker and snowboarder.