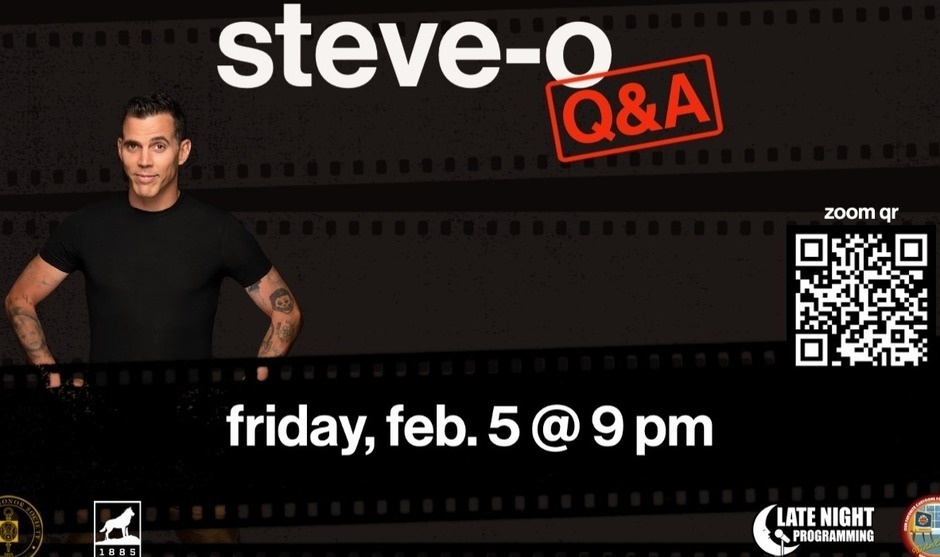 Come celebrate Winter Carnival with us and Steve-O! Blue Key and Late Night Programming are hosting a virtual Q&A session with the man, the myth, the legend.. Steve-O! Join us on Zoom at 9 PM on Friday, February 5th. Bring those questions you have always wanted to ask, or just hang out and hear what he has to say. You never know what could happen! You could also win a prize. Want to learn more about Steve-O? Check it out:

After failing miserably at the University of Miami, Steve-O was a homeless couch-surfer for three years before he attended Ringling Brothers and Barnum & Bailey Clown College, to help further his goal of becoming a famous stuntman. After graduating Clown College, determined to make it in Hollywood, he began to pitch his home videos to producers. Eventually, Steve-O’s videos made it into the hands of Jeff Tremaine (Jackass Creator/Director/Producer), who was working with Johnny Knoxville to create a stunt-based reality show. The rest is history.

Since then, Steve-O has had continued success, as a New York Times best-selling author with the release of his memoir, 'Professional Idiot', and he has established himself as a force in the world of stand-up comedy. He's even landed a handful of acting roles in film and TV. Now in his forties, and wanting to out-do all of his previous work, Steve-O decided to address the "unfinished business" on his bucket list. He's been filming the most elusive and outlandish stunts he ever dreamt up (including Cauliflower Ear, the General Anesthesia Olympics, Vasectomy Blue Balls, Sky-Jacking... to name a few), and is now screening the all-new, unreleased footage exclusively on his BUCKET LIST TOUR.

Most importantly, however, Steve-O has been clean and sober since March of 2008 and, between the various legs of his Bucket List Tour, when he isn't terrorizing Lux with his unending pursuit of the ultimate stunt, they live a surprisingly healthy lifestyle in the Los Angeles area.