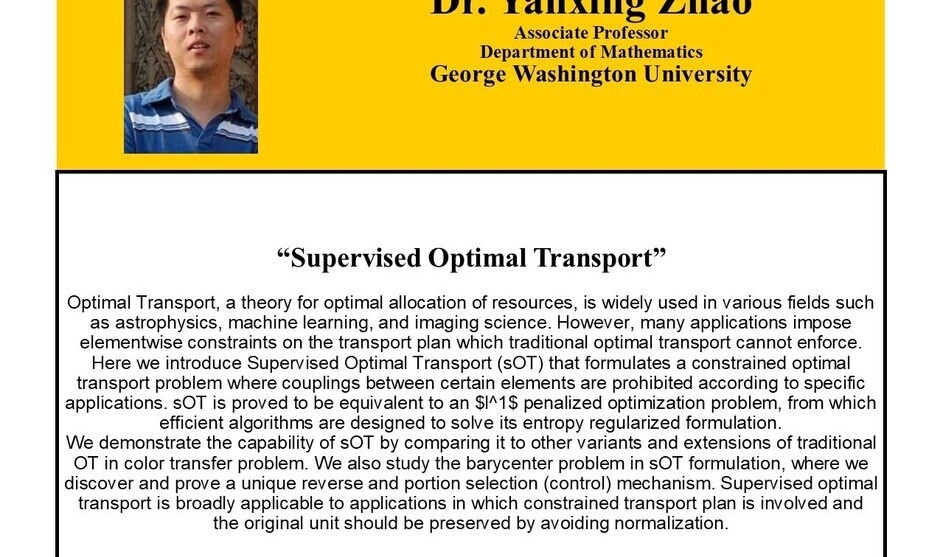 Abstract: Optimal Transport, a theory for optimal allocation of resources, is widely used in various fields such as astrophysics, machine learning, and imaging science. However, many applications impose elementwise constraints on the transport plan which traditional optimal transport cannot enforce. Here we introduce Supervised Optimal Transport (sOT) that formulates a constrained optimal transport problem where couplings between certain elements are prohibited according to specific applications. sOT is proved to be equivalent to an $l^1$ penalized optimization problem, from which efficient algorithms are designed to solve its entropy regularized formulation. We demonstrate the capability of sOT by comparing it to other variants and extensions of traditional OT in color transfer problem. We also study the barycenter problem in sOT formulation, where we discover and prove a unique reverse and portion selection (control) mechanism. Supervised optimal transport is broadly applicable to applications in which constrained transport plan is involved and the original unit should be preserved by avoiding normalization.

Dr Yanxiang Zhao has been an associate professor in the department of mathematics at George Washington University since 2019. He holds a Ph.D in mathematics from Pennsylvania state university (2011). Before he went to Washington in 2014, he worked as a postdoc at the department of mathematics, University of California, San Diego. His research interests include Mathematical modeling and applications in biology, physics and computer science; Computational mathematics. Specifically, he is working on phase field or diffuse interface approach for the modeling and simulations of some interfacial problems and phase field based variational implicit-solvent models for biomolecular interactions. Dr. Zhao has received a number of award including GWU University Facilitating Fund  Award and Simons Collaboration Grants for Mathematicians.