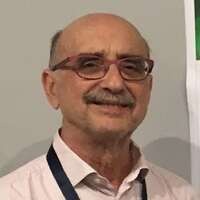 The lectures will be held:

In the three lectures entitled “Raman spectroscopy”, I will start by reviewing the nature of electromagnetic waves in terms of electric and magnetic fields and their ability to interact with matter. The interaction with matter is responsible for reflection, absorption and scattering. When the electromagnetic wave enters a material, its electric field polarizes matter by inducing oscillating electric dipoles. Such dipoles generate spherical waves that, at large distance behave as plane waves that propagate in all directions in space. This is the basic mechanism for the formation of scattered radiation. The scattered waves can vibrate at the same frequency as the incoming wave (Rayleigh scattering) or at a different frequency (Raman scattering). Next I will show how, according to a simple model, Raman scattering due to vibrations and rotations of molecules can be explained. The explanation is not sufficiently accurate, though, due to the fact that the model is based on classical physics. A qualitative description of Raman scattering in terms of quantum physics will be given based on the fact that radiation is made of particles (photons) with energy and momentum, and the scattering process can be viewed as a collision of a photon and a molecule. Conservation of both energy and momentum are to be required which limits the possible transitions in matter that can take place during a Raman process.

Professor Massimo Moraldi comes to us from the University of Florence, Italy. Massimo is also Professor Adjunct in the Department of Physics at Michigan Tech. He began his career as a scientific fellow at the Institute of Quantum Electronics, National Research Council (CNR) where he worked on problems related to Raman scattering from compressed rare gases, in particular the depolarized Raman spectrum. He spent several years at The University of Texas at Austin working on numerical methods for the calculation of line shapes for the collisional induced spectroscopy. At the same time, he has developed a semi-classical method for the study of thermodynamic properties of solids. Moraldi has been collaborating for many years with Professor Borysow at Michigan Tech, working on various aspects of Raman Spectroscopy. He worked at Michigan Tech as NATO Fellow developing methods to extract information on the intermolecular potential from the analysis of roto-translational Raman spectra.

Prof. Jacek Borysow and The Elizabeth and Richard Henes Center For Quantum Phenomena