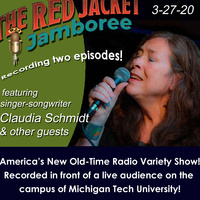 NOTE: In response to the COVID-19 outbreak, this event is being postponed with the intent of it being rescheduled for a later date.

For more than 4 decades Claudia Schmidt has traversed North America, as well as Europe, to perform in venues ranging from intimate clubs to 4,000 seat theatres, and festival stages in front of 25,000 rapt listeners. She has recorded nineteen albums of mostly original songs, exploring folk, blues, and jazz idioms featuring her acclaimed 12-string guitar and mountain dulcimer playing. She's performed several times on "A Prairie Home Companion," the show which inspired The Red Jacket Jamboree. You don't want to miss this iconic performer!

The Red Jacket Jamboree is a NEW old-time radio variety show sharing stories, songs and history from Michigan's Keweenaw Peninsula. Hosted by Lena Dorey, the show is performed/recorded in front of a live audience at the Rozsa Center for the Performing Arts on the campus of Michigan Tech University and also features Martin Achatz, Poet Laureate of the U.P.,the Red Jacket Actors and music by the Copper Cats, with Jerry Younce on guitar, Bill Carrothers on piano, Harry South on bass and Zach Ott on percussion.

The show is produced by the nonprofit, Real People Media, which receives financial support from the Michigan Council for Arts and Cultural Affairs. www.redjacketjamboree.org.