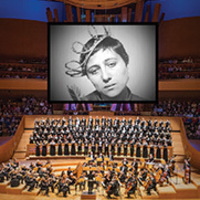 Voices of Light: The Passion of Joan of Arc

The Keweenaw Symphony Orchestra and conScience: Michigan Tech Chamber Singers combine to perform Richard Einhorn's moving score to accompany the showing of The Passion of Joan of Arc, as part of the 41 North Film Festival.

Voices of Light merges the legendary silent film masterpiece The Passion of Joan of Arc, widely considered to be one of the greatest films ever made, with a live performance of a ravishing score by award-winning composer Richard Einhorn. An incredibly moving composition for solo voices, chorus and orchestra, Voices of Light has been hailed as "a triumph" (Los Angeles Times) and "an overwhelming experience" (Chicago Tribune).

Film theorist and historian David Bordwell will present a public lecture on Dreyer and participate in a Q&A with Conductor Joel Neves and Choral Director Jared Anderson following the performance.

For more details about the 41 North Film festival, please visit the festival website